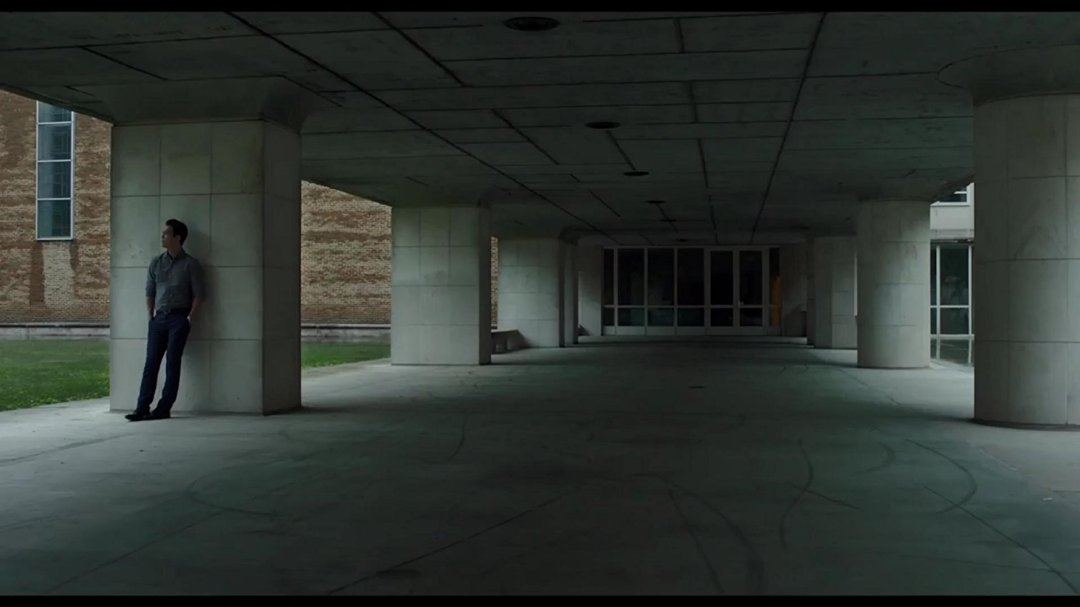 This essay is from when I first saw Kogonada’s incredible debut feature, August 7th, 2017. I wrote it sitting in my car, while composing myself, in the Nuart parking lot. 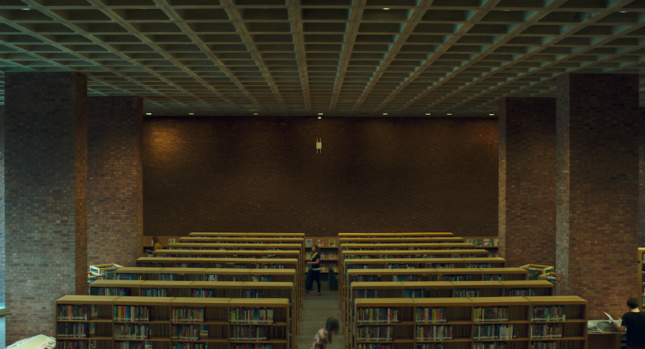 “I don’t want to talk. We never talked. He was never interested. Why should I bother now?”

A few weeks before he died, my Korean father lay resting in his UCLA hospital bed. I was sitting in a small chair between him and the window. I could see the 405 freeway, still under construction back then. He turned to me and asked if there was anything I wanted to ask him. We knew at this point he likely had less than a month to live. I thought about his question… but, at the time, I couldn’t think of anything that I wasn’t ashamed of, or worried he would judge me as unmanly for… so… I lied. I said that there wasn’t. He never asked again. His symptoms escalated the next week and we never had another chance to have that talk. 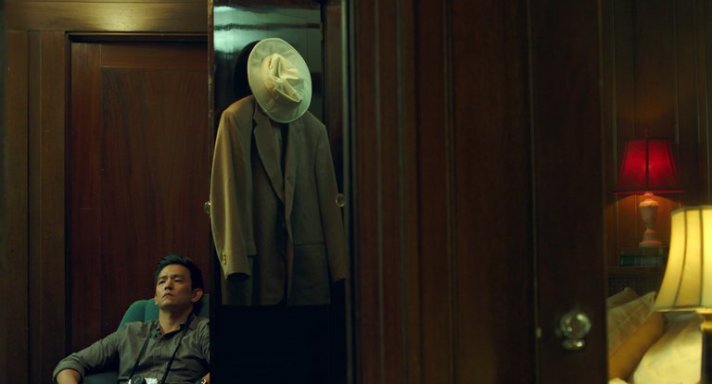 I never talked to my father about any of the things I really longed to. I was too afraid he would have no interest, or be ashamed, of whatever I might say, I guess. He was a very different man than me. His birth-name was Chun-Son (though, he requested everybody call him Sam, for the simple reason that no American ever pronounced his real name right).

“You don’t think Asians can speak English?” he asks.

A fence sits between the Asian and the American. They begin to talk and the camera tracks with them, a composition that’s staged like a modern inversion of the swing-set scene out of On the Waterfront. The take continues as they walk side by side from opposite sides of the fence. Eventually they reach an open gateway and meet with nothing dividing the space between them. The camera movement stops when they do.

“Do you like this building, intellectually, because of all the facts?” Jin later asks Richardson’s character, Casey (short for Cassandra).
“No I’m also moved by it,” she says. 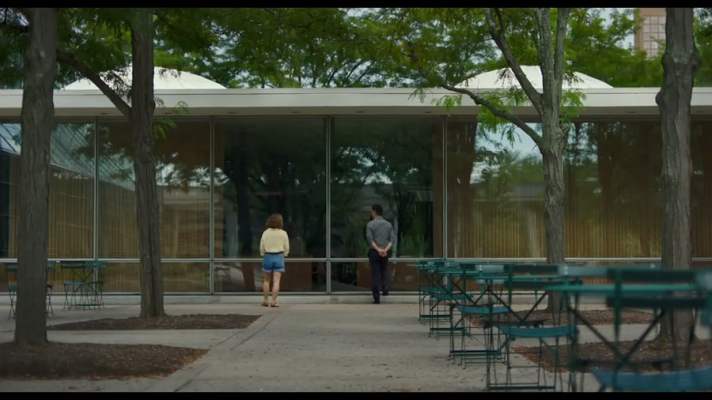 This paradox of discourse is the beating heart of Kogonada’s near impeccable debut. Early on Rory Culkin’s character presents the argument to Cassandra that bookish people find video games pointless for the same reason that gamers find books boring. (As an avid reader who works in a bookstore full of gamers, Can. Relate.) Really, it all comes down to interest vs attention, investment vs agency. How many times have you been enthralled by a lecture others seemed to be sleeping through? I know I’ve lost count. How many times have these same people claimed to have the same dreams as you?

“They know some things but they really don’t give a shit,” Casey muses. Such is the nature of feeling bitter and trapped by the intellectual environment, it happens when you’re knee deep in schooling for far too long. 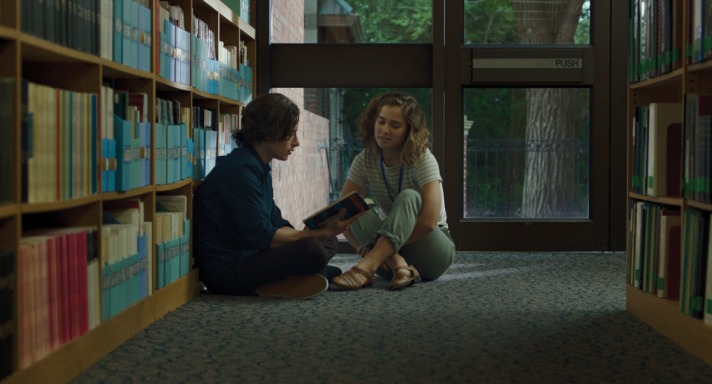 You’re sick of answering the same questions about why you feel however you do about what you love, or don’t, so… you inevitably become a tour guide. You pre-plan speeches in your head, to ease your anxiousness about being asked the same thing over and over. You dole out the same lazy soundbites to people whose opinions you don’t care about, because doing so is less stressful than being reminded that others just don’t get you. And the people you love, who you desperately want to… well… sometimes they’re just not interested in the same way you are, the way you want them to be… so… forever you seek their attention, their approval. You never really talk, not the way you want to.

So how do the Asian and the American communicate? Through legacy – whether that’s a building or a parent occupying the space of it. Jin must care for his sick, likely dying father. Casey can’t leave her lonely mother behind. She feels, she fears, she is all she has left. Both are grieving over a parent who hasn’t died yet. Unknowingly, this brings Cassandra and Jin closer together – well… that and some beautiful buildings.

Walking back to my car after the screening, I thought about a wonderful scene late in the film. I started to tear up. Richardson vents her frustration, dance stomping pavement in front of her headlights, throwing her hair around like a punk rocker jamming to no music, just before blasting it in a drunken fury, later to the chagrin of a formerly passed out John Cho. This scene is pure movie magic. Yes, it is very “in your face”… yet… there are subtleties to it that I got lost in over an hour later. Almost as if entranced by the aftertaste of that song that wasn’t actually playing on Casey’s radio, before it was. When I got to my car I shut the driver-side door, popped a cassette tape in and lost myself in a sea of emotions. 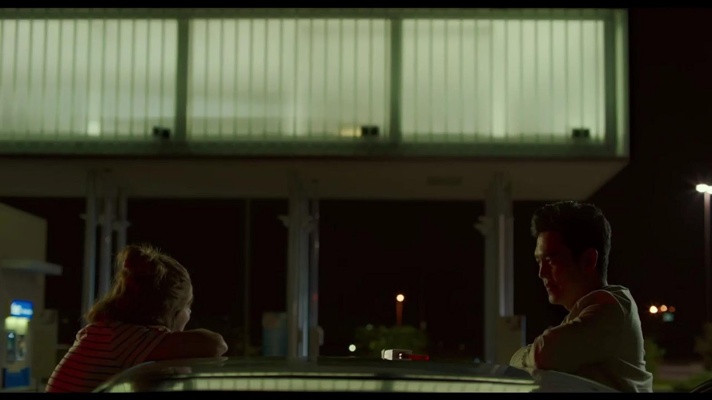 *Check out the director of Columbus‘s video essays at: http://kogonada.com/