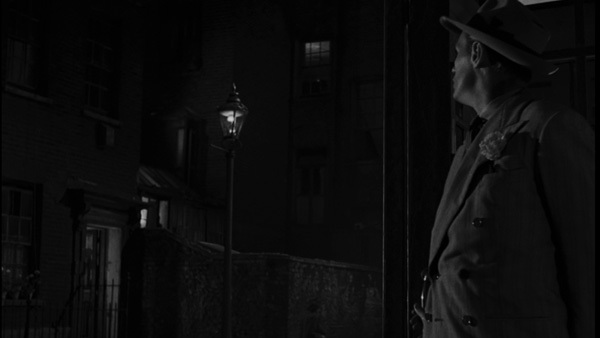 After running through the streets and back alleys of London, the figure at the center of Jules Dassin’s Night and the City, Harry Fabian, slips into an apartment that isn’t his. He checks the window, before moving to the table, nibbling on some food that’s been left out. Mid-bite he spots something off camera, dropping what’s in his mouth as he walks over to the item; a purse. A woman walks in the door behind him as he clutches it: “You won’t find any money there, Harry”, Mary, the woman, says. He turns, face and tone appalled at her behavior: “What do you mean spying on me?” After the outburst; Harry composes himself, as if in less than half a second he’s realized why his initial utterance was a sticky statement. “I… uh… I was just looking for a cigarette,” he rescinds. 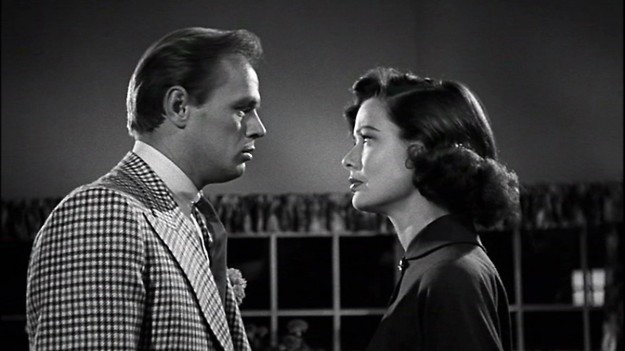 Mary walks over, staring straight through him. She opens her case; holding it out firmly. “Would I steal from you?” he pleads, “What makes you think I–”, she interrupts, “Who are you running away from now?” His smile widens, “Running? Me?!” Harry then proceeds to tell her all about his new plans, ones he’ll soon forget, schemes which seem to always include inserting himself into a world he’s not truly a part of, but is convinced belongs to him. He’s a man who seems to treat every new enterprise, every conversation, as both dear and dire. Even when he goes so far as to intrude on basic human decencies, such as entering Mary’s apartment, eating food off the table, or looking through her purse without asking – or with her even present- Harry Fabian’s own personal interests and ideology take precedence. As a friend of Mary’s soon points out; “Harry’s an artist without an art”. He’s mercurial, and Dassin’s first act is to introduce us to him, a con man who justifies his own values above an entire city’s.

Harry’s ‘purposeful’ agenda is juxtaposed against the verisimilitude of his newest mark, a Greco-Roman wrestling legend, named Gregorius, Gregorius the Great. If Harry is an appropriator, Gregorius is a romantic, their ideologies a foil of one another’s. This rift explores the concept of personal meaning through ideology, judgement and value. For Harry, wrestling is a financial means of survival – nothing more than a way to further his own interests – for Gregorius the art form is everything. When we first meet the Greek he is watching a wrestling match, appalled at the lack of form and technique. Harry immediately sees he can take advantage of the great one’s ideology. He can tap into what this man sees as important, even mythic, to get himself ahead in this city.

Their opposing world views’ directly align with the two contrary ways scholar Raymond Williams claims we understand culture, through “direction”, or through “meaning” (41). Williams theorized “everyday meanings and values [are] part of an expressive totality of social relations”. He summarizes the ‘theory of culture’ as ‘the study of relationships’ (45). Thus, Dassin’s Night and the City can be seen as a study of Harry Fabian’s relationship to London, his city, and how that relationship effects the lives of many others, such as Gregorius. This cultural struggle is represented through the film’s structure, building to a visceral wrestling bout between the Greek and a brute called The Strangler (a wrestler whom Gregorius has no respect for). In attempting to provoke The Strangler into a match with his protégé (to reap the benefit of the show’s profits); Harry ends up incidentally causing the death of the Greek legend.

All the plot threads leading to this sequence reveal Night and the City to be a fascinating examination of self-mythology and structuralism. After Harry manipulates him into confronting the Greco-Roman practitioners in their training ring; The Strangler assaults Gregorius in a drunken rage. “Gregorius the Great, greatest wrestler that ever was. He never lose”, The Strangler taunts. Gregorius is easily persuaded to protect the legacy of his image. His belief in his talent, his artistry, shapes his ideology, while perpetuating the mythology of his form and practice. “According to Barthes… myths make particular world views appear to be unchallengeable because they are natural or God-given: ‘Myth’… makes contingency appear eternal” (80). In many ways Gregorius can be seen as holding on to the myth of himself, his own wrestling background, because it is the only guided meaning he still has. His gifts are God-given in his mind, passed down by Greek ancestors, the originators of his art form. 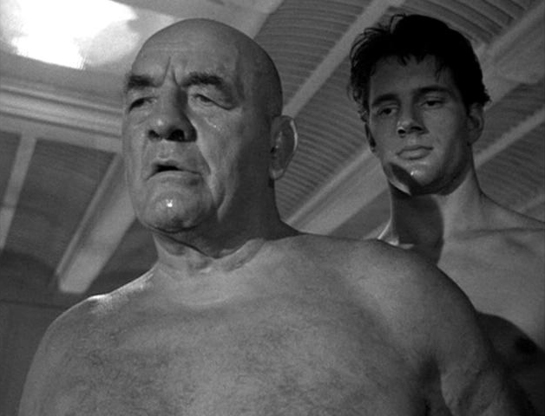 In his essay on the film, “Expressionist Doom in Night and the City” Glenn Erickson notes that the “overhead lighting of the big wrestling match… creates an overexposed look that transforms their combat into a clash between giant, pallid gods” (206). This makes no difference to the city, or the noir genre however. Unknowingly, the Great one is “living in a godless world” (Sanders 96). As film noir is a genre greatly concerned with nihilism, perhaps Gregorius faith was always doomed in such a story. “Nietzsche says that the fiction of being is generated originally through the falsifications involving logic and reason” (Conard 18). At the heart of the very fabric of the wrestler’s being are his own generated, mythological illusions. He can’t – he won’t – let his beliefs die the death Nietzsche would suggest is inevitable.

He does manage to defeat The Strangler after an intense struggle, but the brawl takes its toll on the older soul, and he dies soon after. Additionally, his protégé’s wrist gets broken, the Strangler is overcome by grief after realizing he may have unduly murdered someone, and Gregorius’ son, Kristo (a major figure in the city’s underground), puts a price on Harry’s head; offering “a thousand pounds to the man who gets Fabian”. Through this scene – with the structure building specifically to it – Dassin further illustrates, through structuralism and mythology, the void between direction and meaning, postulating how various moving parts of the city all crescendo through an explosion of conflict – literally exemplified via a wrestling match of opposing viewpoints, precipitated by another alternative viewpoint – a result of a culture built by contrary values, by self-assured ideologies.

Structuralism can be defined as the “understanding of culture [as] concerned with the system of relations of an underlying structure that forms the grammar which makes meaning possible” (76). In other words; “meaning is not generated because an object or reverent has an essential and intrinsic [one].” Meaning is produced out of difference, convention is based on context. There is an “apparent transparency of meaning [in the] outcome of cultural habituation.” Gregorius deep, personal connection to the origins of his form shapes his belief in it. Barthes notes mythology is “thus akin to the concept of ideology… they [both] appear to be pre-given universal truths embedded in common sense” (89). In reality, both are cultural constructions, as “myth and ideology work by naturalizing the contingent interpretations of historically specific personas” (80), in this case, the Athenian wrestler and the American con artist. Harry, Gregorius, and the city itself, are all shaped by different directions of meaning. One could conceivably view Gregorius as the tragic figure of Night and the City, which in turn makes Harry Fabian “the dark underside of the noir victim – far gone before the film opens… trapped in an ongoing nightmare” (168).

“You’ve got it all, but you’re a dead man, Harry Fabian. A dead man,” someone tells him.

The remainder of the film finds our central, selfish character drifting through London like a labyrinth. He’s created a nightmare out of the city, through the falseness of his own ambitions. By ignoring the system of relations that make up the city’s foundation, by not caring about context or differences in direction, Harry only wanders deeper, and deeper in to a maze of his own making. When the final scene arrives we know there is no hope left for him. Like Icarus, the son of ancient Greece’s great builder, Harry Fabian’s been flying far too close to the city of London’s sun. And somehow, he’s managed to do so after all the lights have gone down at night. 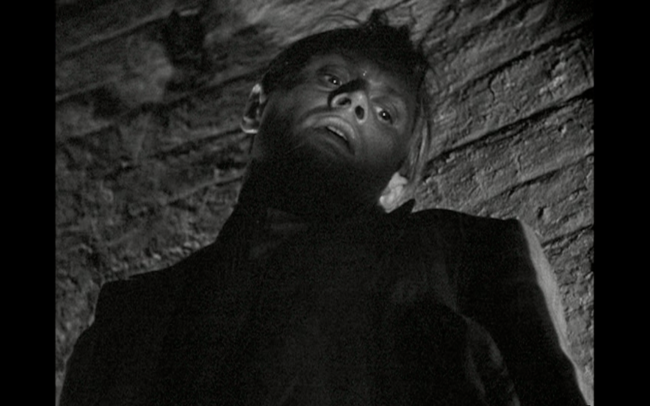